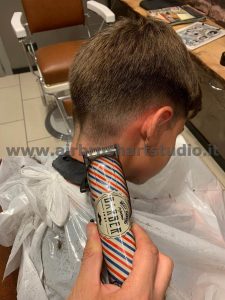 We look to the future by remembering the past

Airbrushartstudio.it realizes with airbrush the new graphic design of the hair clippers and beard trimmers of the renewed beauty center Belli Dentro.

The established reality of the Barber Shop has relied on the many years of experience of airbrushartstudio.it for an artistic restyling of its “equipment park”.

Vintage graphics inspired by the classic barber’s “pole”, with its 3 colors, frames the original “Belli Dentro Barber Shop” logo, while a black perimeter shade blends everything with the body.

In conclusion, it must be said that these airbrushes immediately stand out within the beauty center, immediately attracting the eyes of many customers. 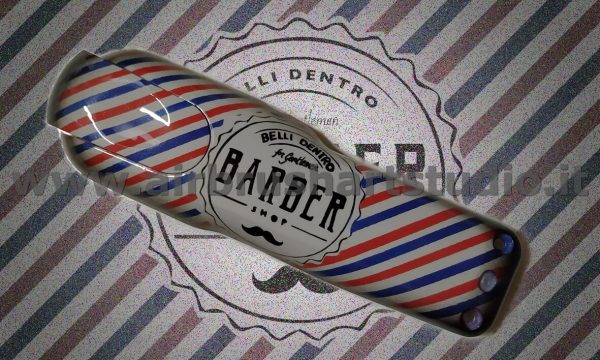 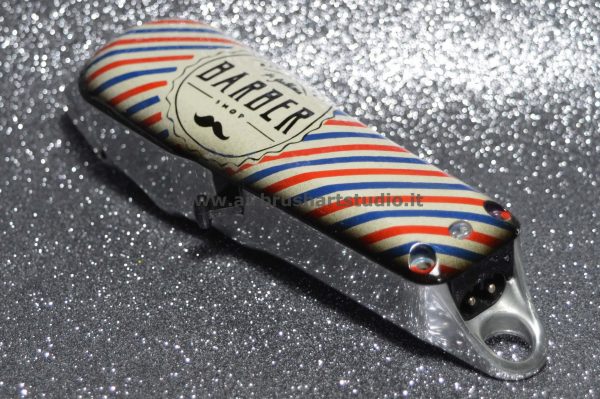 n the Middle Ages, barbers also assumed another function in addition to cutting the beard and hair: in their shops they also carried out services such as the incision of abscesses, the recomposition of fractures, the extraction of rotten teeth and the removal of lice, fleas and ticks. This is because between 1123, the year of the first Lateran Council, and 1215, the year of the fourth Lateran Council, Catholic priests and deacons were prohibited from practicing medicine to the detriment of their ecclesiastical function (until then, in fact, it was precisely religious who, learned of anatomy, treated the sick and often performed small operations) leaving the barbers to occupy the “niche” of work.

The most important service, however, was bloodletting, a medical practice then widely used. The actual surgeons considered the art of bloodletting to be a minor practice, well below their status, and sent all the patients in their opinion curable with a simple blood sample to the barbershop.

In order to advertise their business, in medieval London, each shop displayed large mugs filled with the blood of customers in the window so as to attract the attention of passers-by.

In 1307, also in London, a law was enacted which ordered: “no barber will be so reckless or daring as to put blood in the windows” thus putting an end to this unhygienic and probably unpleasant practice to the eye. The same law required barbers to dispose of body fluids by taking them to the Thames, and throwing them into the river.

The barbers guild began to use the striped pole as a less gory symbol to advertise the services offered. The rod referred to the pole that was given to the patient to hold during the bloodletting, so that the arm remained horizontal and the veins were clearly visible due to the effort. The bronze pommel at the end had the shape of the vessel in which the blood collected. Initially, the red stripes were simply bloody gauze wrapped around the pole and dried in the sun. (f. Wikipedia)